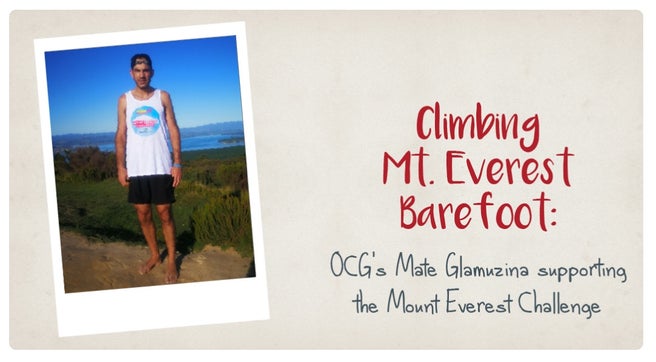 Mate is climbing Mt. Maunganui 38 times in 50 days to raise money for the Waipuna Hospice as part of the Mount Everest Challenge. You can support his effort here.

About a year ago I decided to focus more on my health. To begin, I set myself a small goal: walk up the Mount once a week. Over the course of the year as that got easier, I was able to set more goals and go up the Mount more than once in one session (five times in one session in fact and that number continues to grow exponentially). As my fitness increased, so too did my goals and then along came the Mount Everest Challenge – walking up the Mount 38 times in 50 days; the equivalent of climbing Mount Everest.

This challenge was the perfect motivation to keep goal-setting while giving back to the community by raising money for charity (the Waipuna Hospice in this case).

I was partly inspired by the story of Kiwi adventurer Mike Allsop, who, over the course of his entire life, has achieved some extraordinary targets he’s set for himself; from wanting a career as a pilot to climbing Mount Everest, to running seven marathons in seven days on seven continents. Mike broke down his goals, focusing all his attention and ambition on smaller, individual steps that would eventually result in achieving the overarching goal.

While I’m not quite ready to run seven marathons in seven days on seven continents, I resolved to test myself further for the Mount Everest Challenge. I’d already been cold conditioning my body as part of my fitness regime but decided walking up the Mount barefoot was the next level to try. And it’s been hard; in particular I’ve had to overcome my mindset around the level of discomfort those two activities bring. The goals I’ve set myself and how I’d like to achieve them are unconventional, but rewarding; my legs feel stronger from using more muscles, I’m feeling healthier and fitter than ever and of course, I’m raising money for the Waipuna Hospice.

I’ve found that Mike’s way of breaking down goals into steps that get results is effective. The process is akin to goal-setting for your career too, all you need to do is ask yourself the following questions:


It’s also important that each person’s goals, and ways of achieving them, are different – and that it’s not a competition. For example, there is a local rugby player taking part in the Mount Everest challenge too. He completed the challenge on day one, running up and down the Mount 38 times in one go and taking the complete opposite approach to me. Likewise, everyone has a different approach to their career. If you’d like some advice on achieving your career goals, feel free to get in touch, and of course, take a look at my Givealittle page to find out more about the cause and to donate.