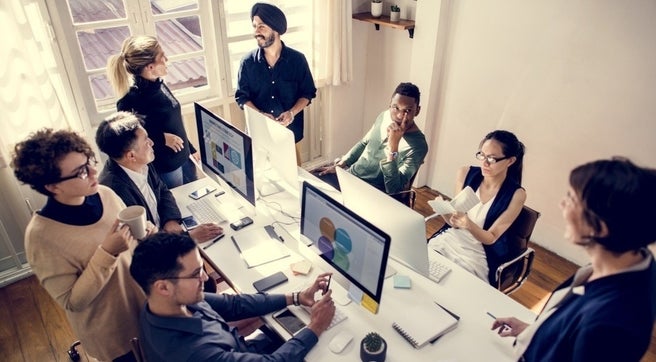 Not too long ago, there was a shift in thinking when it came to recruitment. Organisations started to embrace the idea of culture fit, with many making it a top priority to ensure that the people they hire complement their existing team and culture. However, over the last couple of years, we’ve seen some organisations start to take a slightly different tack, moving on from culture ‘fit’ in favour of culture ‘add’.

So, what does this mean, and why is this happening? Here are a few reasons why culture fit is making way for culture add.

It’s widely believed that hiring people who fit a company culture will mean that they quickly settle in, gel easier with team members and add more value. We spend such a large amount of time with our colleagues; it’s natural to want to hire people who we share similarities with. However, just because you think you would enjoy having a beer with the person, does not necessarily mean that they would be ideal for your organisation. Only hiring people to fit into your existing culture can mean you’re missing out on some amazing candidates and can unintentionally lead to bias.

Whilst most people have the best intentions when hiring for culture fit, we think it’s best to think about culture add. The key to culture add is to have an idea of what kind of attributes could help your culture, even if that involves asking yourself some challenging questions. This is especially true for companies looking to build more diverse teams.

All organisations ask questions around personality in interviews. With start-up companies, we often see them asking questions seeking out a specific mindset, as they’re looking for people with the same attitude and approach to grow the business to a certain point. This is all very well and good, but when you’re looking to scale, it can become an issue. Consistently looking for this same mindset can result in too many similar people being hired, which results in groupthink and can lead to stagnancy.

Telling someone that they haven’t got the job because they don’t fit into the company culture can also be vague and can even be perceived as an excuse for not hiring them. To avoid this, ensure the questions you ask in the interview are relevant to the role; not the aforementioned “would you enjoy having a beer with them” test!

One of the unfortunate, and often unintended side effects of hiring for cultural fit, is that it can undermine a company’s attempt to diversify their workforce. However, there’s plenty of research into diversity that demonstrate having a diverse workforce is a good business decision and can give a business a competitive edge. A 2015 McKinsey report found that those in the top quartile for racial or gender and ethnic diversity in management were more likely to have a financial return above their national industry medians, They are also more likely to have better talent attraction, customer engagement, employee satisfaction, and successful decision-making.

A recent Glassdoor survey also found that two-thirds of the people surveyed said that diversity was important to them when evaluating companies and job offers. This suggests that an employer who embraces diversity and is seen to provide opportunities for everyone is a more attractive employer. Other research findings have found that diverse teams are more creative, make better decisions and are more innovative. True diversity is all about diversity of thought; people with different perspectives that are making meaningful contributions. Why would we want all our employees to be similar? Is it not better that we embrace our differences? Benefit from different perspectives? This creates an environment where differences drive ideas and innovation flourishes.

That said, we do believe that culture fit still has a role in the hiring process.

An organisation who has spent years creating a great culture naturally wants to keep that intact, while additionally a start-up company who is working hard to grow the business is going to be more cautious.
We sometimes shudder when we hear some of the questions that have been asked to candidates. For example, why is it important to ask what kind of music someone likes? Unless you work in the music industry, it’s not usually relevant to the role (and even then, it probably wouldn’t matter!). Then there are the “curveball questions”: what fruit they would be? What will their answer actually tell you? What will you get out of that question?
Instead, we think it’s key to focus on the core values that are important to your company. Your values are a framework for how a company operates and how team members achieve their goals. When they’re central to a company, they play a key role in creating culture. We can understand why some organisations worry that if they hire for culture add their culture would be diluted, so long as new team members reflect the same core values this won’t be the case.

It’s an interesting shift but we believe that highlighting core values and embracing diversity will result in finding team members who add to a culture and help move the business in the right direction.

What do you think?

If you’d like to discuss this area or would to find out more about how we match quality candidates and employers, please do not hesitate to get in touch.