What We Can All Learn from Team New Zealand’s Success 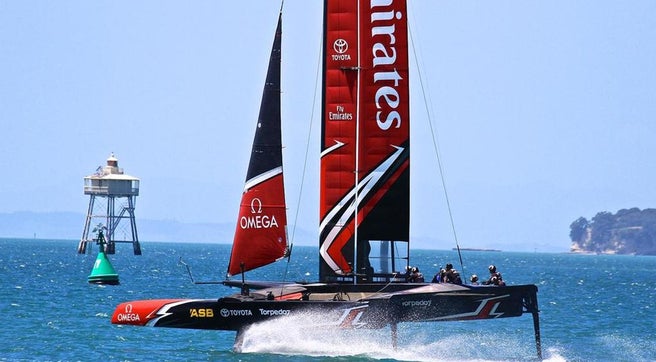 I, along with the rest of the country, woke up at 5AM last Monday morning to watch Team New Zealand sail to victory in the America’s Cup. After the celebrations had settled down and I was able to think about what it meant to NZ, I was struck by their work ethic, passion, and innovation. Three cornerstones of what we associate as being the Kiwi mentality. What we lack in resources, or numbers, we make up for with dedication, hard work, and good old-fashioned Kiwi ingenuity.

So, as I sat there in my red socks, cheering on the team, I started to think about my team, and the teams that I work with and recruit for. Parallels are often drawn between sport and business, the idea being that the foundations of success are the same, no matter what the context. One of those foundations is the importance of your team. We’ve all heard clichés like “teamwork makes the dream work” but it’s more than that; it’s also about those in leadership positions having the vision to make decisions around innovation and change that will help their people, and their business, thrive.

Team New Zealand are a great example of doing this. In a situation where they had to sell key equipment and were barely being able to pay their staff, Team New Zealand were forced to innovate to quite literally stay afloat. In the build-up, much was made of the unique cycle grinding set up and the “x-box wing trimming” console, but the gamble paid off. Despite having a fraction of the budget that their opponents did, they dominated Oracle when it came to the race.

Their success really shows the benefits that outside the box thinking can have, both in terms of saving costs and achieving success. As a recruiter who studies the talent market every day, it’s all too obvious that things are changing. Candidate priorities are shifting and the unrelenting march of technology continues to disrupt and transform so many roles. Despite this, some organisations still persist with the same strategy that brought them success a decade ago, and expect it to yield the same results. It’s just not realistic.

This has flow on effects to the way the team performs on a day to day basis as well. If teams are led by people who don’t have the right mindset, then you’ll likely encounter problems with motivation, work ethic, and ultimately, performance. Now, we’re not saying that it’s a good idea to slash budgets in an attempt to force innovation and team coherence! However, if something isn’t working, and this staleness becomes pervasive across the business, then sometimes it’s best to clear the decks and try a new approach.

What’s important to note is that, although the trying circumstances may have brought them closer together, Team New Zealand had a clear and agreed-upon purpose: writing their names in history by winning the America’s Cup. Once your business’ purpose has been established, that’s when you can rally people around a common goal and go to task with an engaged and motivated workforce. This is a huge thing to consider when it comes to recruitment. I’ve seen so many instances of skilled and experienced professionals being outperformed by people who are aligned with the organisation and have the right attitude, even if they might not be as technically proficient.

Sometimes it’s a far better approach, especially long-term, to hire someone who is passionate and has a willingness to improve, over a known quantity who would just reinforce the status quo. If you put your trust in the lesser-experienced candidate and give them the opportunity to make their mark, often they’ll do everything they can to prove their worth. Just look at 26-year-old Team New Zealand ace, Peter Burling, the youngest winning helmsman in the history of the America’s Cup!

We can all learn something from Team New Zealand’s success: to not be afraid. To not be afraid of the odds; of your richer, more experienced competition; of investing in innovation; or of taking a risk on passionate people. If we take anything from their success, let it be that. Let’s all continue the amazing legacy of Kiwi ingenuity, and come back as winners. Let me know how you go. I’ll still be backing black!